Is it time for TPS II?

What the world’s biggest carmakers can learn from other corporate turnarounds.

“Less than two years ago Toyota swept past an ailing General Motors (GM) to become the world’s biggest carmaker. Now its newly installed boss, Akio Toyoda, the 53 year old grandson of the founder, says that the firm could be locked in a spiral of decline. Toyota is still a hugely formidable company, and some within the industry (and inside Toyota itself) believe that Mr Toyoda may be overstating the case. Yet there is no shortage of signs that all is not well.

Toyota’s story has implications beyond the motor industry, for it is not just a car company; it is the model for manufacturing excellence whose “lean” techniques have been copied by countless firms. How it slipped up –and how it may right itself –carries lessons for others.

Althought some of its rivals, notably Volkswagen of Germany and Hyunday of South Korea, have come through the terrible past year relatively unscathed. Toyota’s market-share has either fallen or been flat in every region in which it operates except Japan—a market that was shrinking well before the crisis struck.

In America, its biggest and normally most profitable market, Toyota has been plagued by highly publicised recalls that have raised embarrassing questions about the safety of its vehicles. In China, India and Brazil, the big emerging markets that will provide nearly all the industry’s future growth, Toyota has been slow of the mark. Its lead in hybrid technology is under threat as other big carmakers scramble to bring low –and zero –emission vehicles to market before low –carbon legislation bites. Astonishingly, in the first three months of 2009 it made an even bigger loss than GM, which was then on the verge of bankruptcy. Underlying all these problems is an uncomfortable truth: Toyota’s rivals have now caught up. They now offer cars that are just as reliable but far more exciting than the rather dull vehicles Toyota has concentrated on producing in ever –larger numbers.

A bit of vroom needed.

Toyota can also learn from the woes of other carmakers. A decade ago Ford thought it had found a saviour in the dynamic Jac Nasser, who declared his intention to transform the firm from an old –economy carmaker into a nimble, internet-savvy, consumer powerhouse that managed brands and sold services. He also went on a wild acquisition spree, paying huge sums for Volvo and Land Rover. Unfortunately, amid Mr Nasser’s cultural revolution, Ford lost sight of its main purpose: building decent vehicles as efficiently and profitably as possible. That is what Ford is reaping the rewards for doing now, under the less exciting but steadier leadership of Alan Mulally.

Toyota, too, has a good chance of putting things right. It is no GM, which had far deeper structural problems before it used bankruptcy to off-load some of them. It has a boss who understands what has gone wrong –namely, that it has jeopardized its formerly stellar reputation for quality by pursuing volume at all costs and by failing to put the needs of its customers first. It has started to sort out some of its problems. Quality and reliability are getting back up to the mark. Now it needs to make more exciting and innovative cars.

Mr Toyoda’s approach is not visionary. It is simple, incremental and requires painstaking attention to what the customers want. That is its virtue.”

Posted by cebrianpablo on December 16, 2009 in Lean Manufacturing, Toyota

63rd IAA Cars: experience automobiles outdoors, too – with all your senses

“A Moving Experience.” The slogan of the 63rd International Motor Show (IAA) Cars stands not only for numerous new technological developments and vehicle premieres, but also for the many attractions and activities that are moving – in the truest sense of the word – on the IAA’s open-air site. Here visitors can join in instead of just looking, no matter whether they are interested in the smaller vehicles on the go-cart track and model racing track, or the larger ones on the off-road circuit and the streets of Frankfurt. 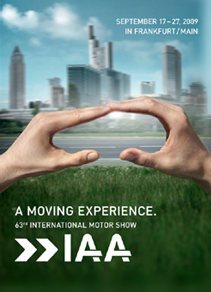 economical driving training (http://www.iaa.de/vda-eco-training), learning how they can reduce their fuel consumption and emissions by up to 20% by observing some basic rules and making the best use of modern vehicle technology. The valuable tips can be put into practice right away on the way home or during a test drive in one of the IAA’s many innovations. The starting point for the 14-kilometer route is Hall 10 on the IAA trade fair grounds.

This year again, visitors to the IAA can not only admire numerous new models at the exhibition stands, but they can also test them themselves directly at the show. Manufacturers from both Germany and abroad are making their particularly efficient and economical models available for free

test drives (http://www.iaa.de/testrides) on Frankfurt’s roads. An expert will join the test drivers as a passenger and provide information about the car’s technical details.

IAA outdoor go-kart track (http://www.iaa.de/outdoor-go-cart-track) gives visitors a Formula-1 feeling and lots of fun on the racetrack. This high-speed highlight on the open-air site to the south of Hall 10 gives the drivers a real thrill on the spectacular 600-meter racetrack. With up to 12 karts all running at once, there’s a real racing atmosphere.

The model racetrack specialist Carrera invites visitors to go in for motor racing on a smaller scale. They will drive remote-controlled cars on a digital racetrack covering more than 230 sq m (http://www.iaa.de/carrera-challenge), competing for victory each day and hoping to qualify for the grand finale at the

Carrera Challenge Tour 2009 in Essen in November, and also for the showdown at the Carrera European Championship 2010. Carrera is presenting the Championship on the Agora, the open-air site in front of Frankfurt’s Festhalle. If you want to join in, download a “driver’s license” from

www.carrera-challenge.com and hand it in to the race manager, or simply apply directly at the racetrack.

off-road circuit (http://www.iaa.de/off-road-parcours) to the south of Hall 10. The most advanced off-road vehicles will take visitors over lumps and bumps, potholes, extreme slopes, gravel tracks, a see-saw and bridge constructions up to seven meters high with an 80 per cent gradient. The professionals at the wheel take the vehicles through the most demanding, 5,000 sq m off-road circuit and show just what technical capabilities there really are in modern off-road vehicles and SUVs.

Visitors can experience these events and activities, and many more besides, at the 63rd IAA Cars in Frankfurt am Main from 17 to 27 September 2009. All the information about the trade show, e.g. the special shows, opening times and advance ticket sales, is available on the Internet from the official IAA web site http://www.iaa.de.

Posted by cebrianpablo on August 14, 2009 in Uncategorized