RSS
← Yes, #HootSuite is working now. I will t
Yo, emprendedor →

The Beer Game as explained in Lean Thinking; How to promote flow

“The Beer Game or JIT Game is a simple exercise in which 5 people take roles in a four-stage production process folding and packing three colors of paper boxes. (See figure below) 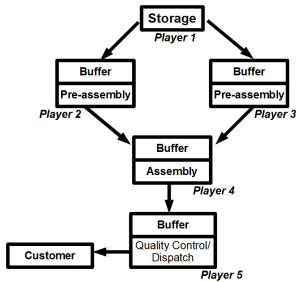 The players are told to work at their own pace to produce the three colors of box in response to the customer order. Soon every player is trying furiously to complete his tasks, first for one color of box, then for the next. However, a huge mountain of boxes quickly builds up in front of the fourth player, who has a bigger job than the others. In addition, the customer announces that he wants to change his order, to receive first whichever color of box the team has left till last. This quickly produces even more of a pile-up as the wrong color boxes are pushed to the side so the right color can get through.

The team of five is then asked what’s wrong and what could be done about it. The answer is always the same: “The fourth player is the bottleneck so we need to add another worker to the assembly step and build a storage area between steps two and three”.

The game coordinator then suggests that instead the five players should try a pull system by making only five boxes at a time and only when asked (pulled) by the next player downstream. To the player’s amazement, the whole activity proceeds smoothly, with oly a tiny buildup of boxes between steps two and three. They then play two more rounds, reducing the lot size to three and then to one, eventually achieving perfectly smooth flow and no buildup of boxes at all.

Next the game coordinator says the customer is going to vary his orders at random between the three colors of boxes and asks what will happen. The supplier executives recognize this situation as the key headache in their lives and predict chaos. But, of course, with no boxes piled up in inventory, it’s a simple matter to switch from one color to the next.

As the supplier’s managers are scratching their heads, the team moves from games to reality by suggesting that the exact same techniques should be introduced in the shop floor activities.”

More resources on the beer game:

Posted by cebrianpablo on April 18, 2010 in Flow, Just in Time, Lean Manufacturing, Management

← Yes, #HootSuite is working now. I will t
Yo, emprendedor →